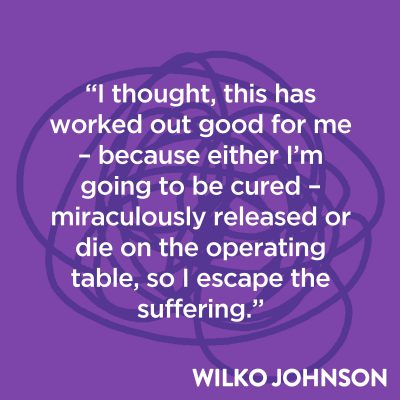 Wilko Johnson is one of Britain’s most revered rock stars … the Dr Feelgood guitarist who inspired Paul Weller and Joe Strummer. He’s also a man with a unique perspective on mortality as well as music. After an astonishing career (that included a role in Game of Thrones) Wilko was told in 2013 that he had terminal pancreatic cancer and only months to live. He rejected chemotherapy and set about saying goodbye to his fans around the world in the only way he knew how … with a farewell tour and hit album. Towards the end of his last year a fan – who was also a cancer specialist – urged him to seek a second opinion. Wilko had been misdiagnosed and after an 11hour operation was saved. In this bonus episode, Wilko talks with clarity and power about the 12 months he spent believing his death was imminent. A year he describes as both vivid and profound.

1. Not Drinking: Alcohol can turn depression into despair.

3. Van Morrison: Almost Independence Day from the album Saint Dominic’s Preview. It finishes with this long droning synthesizer note – you hear that and think everything’s going to be alright.

I’ve talked on this podcast with a number of people who’ve faced the prospect of death either in an accident or through illness. But this is the first conversation with someone who knew – with absolute certainty – that their death was imminent. Wilko Johnson’s incredible story would not, as he says himself, get past the scriptwriting stage of any drama. So unbelievable were the chain of events that led him to losing and then regaining his life. The insights that journey afforded Wilko left me mesmerised. “Everyone imagines how they’ll react with a cancer diagnosis,” he told me. “I was absolutely calm.  I just thought – Oh! This is how it ends .. For me, the question of mortality was answered. I pitied everyone else walking around fearing death.” Wilko is a man who has lived a rocker’s life … full of the superficial ups and downs of what he calls ‘the biz’. But he’s also a man capable of the most breath-taking insight and it was a privilege to listen to his analysis of a truly unique crisis.