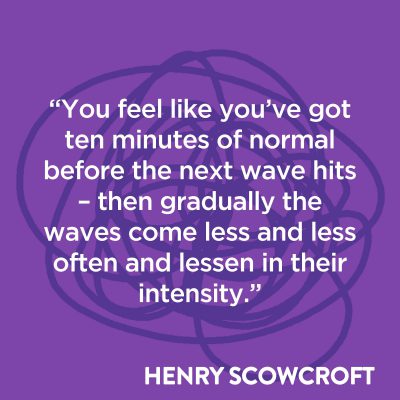 Henry Scowcroft is an award-winning science writer for Cancer Research UK.  In 2016, his girlfriend of six years, Zarah Harrison was diagnosed with an aggressive stage four tumour. After a short and brave battle she sadly passed away, with Henry by her side, just as he had been throughout her treatment.

Struggling to cope and with a need to understand what had happened, Henry channelled his grief into writing ‘Cross Everything’ – a book which documents both his personal relationship with Zarah and her illness but also their struggle to understand and come to terms with her cancer.

The result was a memoir and manual that has been described as the most emotional textbook you will read.

In this shortcuts episode, Henry explains how, through his writing, he was able to provide a powerful legacy for Zarah – and a guide for others who face a similar challenge.  It is a detailed and deeply moving conversation about grief, making sense of the unfathomable nature of cancer and recovery.

1 – To carve out time for myself and make sure I’m looking after myself so I can be as helpful to the people around me as I can.

2 – Not getting caught up in the shoulda’ woulda’ coulda’ – there’s always a way to look back at the way you ended up in a situation you’re in and think, ‘if only I’d done X, if only I’d done Y, I wouldn’t be here.  But the fact is, you are where you are.  You’re here now.  Look forward, not backwards.  Focus on the horizon and not over your shoulder.

3 – Music – Particularly the guitar which I’ve always loved playing.  I play in a band to this day.  I love listening to music – it’s so powerful at being able to get your head in a different space to where it is.  If you want to weep then music is incredibly good at taking you into that zone.  It was especially important when Zarah died.

Speaking with Henry Scowcroft was nothing short of a complete privilege.  He is a man who has spent much of his adult life communicating the work of Cancer Research UK to a wider public

Armed with his professional understanding of the disease, the unenviable task fell to him throughout her treatment to communicate details to her family, friends and even with Zarah herself.  Following Zarah’s death, whilst struggling to cope with his overwhelming loss, Henry decided to use the emails and notes he had accumulated to bring a more comprehensive understanding of the disease, not realising that in doing so, he was processing his grief, as he says, quite literally putting it between two covers and placing it on the shelf.

He speaks of the importance of humour, calling out the absurdities of life and sometimes giving in to the laughter.  He is careful not to allow any regrets he has to take a hold, knowing that for the most part, the end result would remain the same.

This is a powerful and very human story – it’s a story of bravery, loss and one of great sadness but it is also one which champions the power of hope and as Henry rightly says – hope is probably the most important thing we have. My thanks to him for sharing his story.