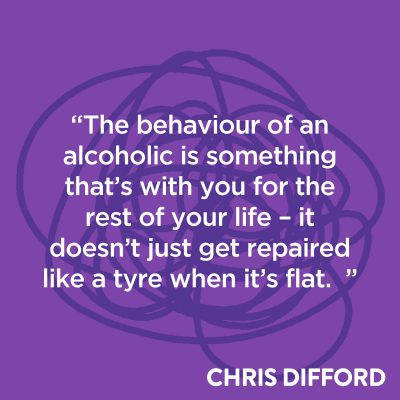 Chris Difford is a lyricist and co-founding member of 70’s & 80’s new wave pop band Squeeze.  With classic hits such as Tempted, Up The Junction, Labelled With Love & Cool For Cats, his contribution to the British music scene has been considerable and long lasting.

In this conversation Chris talks with power and candour about the challenges he has endured and survived including addictions and chronic dyslexia which impacted his childhood deeply.

Despite being hindered by a stammer and labelled as ‘backward’ by an unsympathetic school system,  Chris was determined to follow his dream to join a band and become a songwriter. Squeeze went on, of course, to have huge commercial success both here and in the US.

But as the tours stacked up, Chris had clearly started self-medicating with alcohol and drugs, retreating slowly as he says to a ‘very dark place’.  His chronic fear of flying and months spent on the road away from his young family began to take their toll and it was only with the intervention of a friend which made him see he had a serious problem, taking him to a treatment centre and helping him on his road to recovery.  This week Chris celebrated 29 years of sobriety and continues to ‘pay it back’ in-between touring by holding song-writing workshops in prisons and raising money for food banks and NHS nurses.

As Squeeze prepare to be one of the first bands to cross the Atlantic following lockdown restrictions, touring on both sides of the States with Hall & Oates before returning to the UK to tour with Madness, Chris shares his simple approach to keeping life within the four walls of his day.  An impactful and heart-warming first Shortcuts episode.

1. AA/NA Meetings – Listen to what’s going on. Buddy up with somebody – somebody will always be there to hold your hand and make you a cup of tea.  You’ll never forget the taste of that cup of tea if you get the message.

2. Adopt a piece of music – Have it around you at all times. For me that’s James Taylor “You’ve Got a Friend.”  I’ve always loved it.  There’s something very moving about the chords and the words.  They can lift you out of a dark place.

3. Keeping things simple – Don’t live in the past. You can’t regret what you did yesterday because it’s gone, and you can’t know what’s coming in the future.  We all like to live in the future but it’s quite dangerous.  Living within the four walls of a day is the simplest thing to do.  The routine of a day is extremely important.

I’m so grateful that our first Crisis Shortcut comes courtesy of the brilliant Chris Difford. Anyone familiar with Chris’s unforgettable Squeeze lyrics will recognise the moving, almost poetic way he talks about the crises that have been part of the backdrop to a stellar career. The early challenges he faced as a child with undiagnosed dyslexia – labelled ‘backward’ by his teachers – no doubt provided him with a drive and determination and a love of the creative. But they also, as is the nature of childhood trauma, contributed to the difficulties he had to confront in his adult life.  Chris’s description of his ‘drinking career’ and recovery are, I think, especially valuable for anyone trying to come to terms with addictions. As he says: “Addicts are the most intelligent people I’ve ever worked with.  They’re very clever at wriggling out of situations.  So you have to wait till they’re at the bottom of the barrel with no way of scraping their way out.”  This Shortcut is 15minutes of honesty, delivered by one of our greatest musicians and songwriters without a shred of self pity.