Sebastian Coe on Olympic crises, integrity and a sense of the absurd 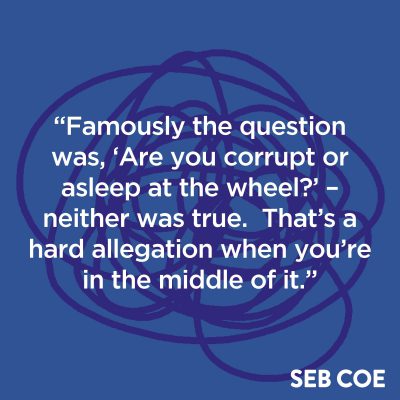 Today’s guest is Lord Sebastian Coe.  Double Olympic Gold Medal winner, politician and driving force of the brilliant 2012 London Olympics. Seb’s career has largely been one of triumph. But as President of World Athletics he has also known what it is to be at the centre of crisis … and to have your own integrity questioned. Seb talks about the ups and downs of his life in compelling and frank detail. And he explains how his resilience – both in times of success and difficulty – came from his Yorkshire upbringing and his father and trainer Peter, a man who survived a truly dramatic war time experience. As Seb says: “The human condition is landscape, it’s geography, it’s family, it’s friendships, it’s influences – with mine I was very lucky. I’m forever indebted.” This is an episode packed with sound, practical crisis advice from a man who has led a remarkable life in the public eye.

1 – Friends.  If you can count the number of true friends on the fingers of one hand throughout a lifetime then you’re doing remarkably well.

2 – Music.  I’m a passionate Jazz aficionado – I’ve got thousands of recordings.  I find jazz the most mood alerting music.  I walked from the warmup track in Moscow to the final of the 1500 in the stadium listening to Sidney Bechet – Just a closer walk with thee’

3 – Recognise the absurdity of life.  Sometimes you just have to sit back and say, “this is beyond comedic and accept it for what it is.”

Seb and I talked just days before the start of the Tokyo Olympics … an event that has been beset by crisis for the last 18months. As a member of the Olympics organising committee, Seb gives a pretty sharp view on that challenge and not unreasonably raises the issue of consistency of policy … something that’s front of mind for us all right now. But it’s Seb’s personal crisis story that I think is the really fascinating and valuable aspect of this podcast. Seb’s amazing career has been a tale largely of triumph. But more recently as President of World Athletics though he has known controversy and personal crisis. In our conversation, he describes the two years of legal drama over the Russian Doping scandal as the most difficult of his life. And, as is so often the case in this podcast, when it comes to explaining how he got through it, the conversation turns to the past, to his upbringing and specifically to his father Peter, who was also, of course, his trainer.  There is, I think, a straight line to be drawn from his father’s dramatic war time experiences – survivor of a torpedoed Merchant Navy ship and a prison camp – and the resilience Seb demonstrated so many years later as his own integrity was questioned. But I was also really taken with Seb’s formula for crisis management – both organisational and personal. At the core is remembering who you really are and where you want to be when the crisis is over. But also to maintain a sense of the absurd, as he puts it. That ability when in crisis to say to yourself “Ok, what’s happening here is beyond comedic, but it is happening so get on with it and get through it.  That really resonated with me. So, another episode packed with useful guidance but also just a great story of a remarkable life. My thanks to Seb and I hope you enjoy it.