Richard Clemmow on the terror of brain cancer, fighting for time and the desperate need for a new approach 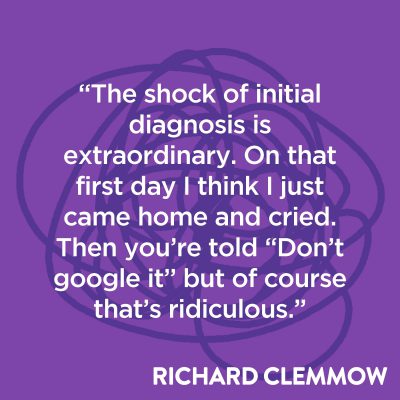 My guest for this episode is the journalist, documentary maker and radio script writer, Richard Clemmow.  Richard and I are both trustees of Our Brain Bank, a charity which supports people affected by Glioblastoma – one of the most complex and aggressive brain cancers.  GBM is a cancer which sadly we both have a very personal connection with.  I became a trustee after my family lost my sister Deb almost four years ago after she was diagnosed with a GBM.

Richard was married to the pioneering TV executive Jana Bennett.  As Director General at the BBC, Jana reached higher office than any woman before her.  She transformed the corporation’s science coverage, creating Walking With Dinosaurs and later overseeing the introduction of the iPlayer.  Jana also sadly died of a GBM earlier this year – she was just 66 years old, leaving Richard and their two children completely devastated.

In this podcast, Richard and I talk about our shared experiences with GBM, for which treatment has not developed significantly in the last couple of decades.  We discuss why that is, the shocking lack of information that is available to GBM patients and their families and why OBB is so determined to shine a bright light on this terrible, terrible disease.

Richard talks with power, clarity and in incredibly moving detail about Jana’s determination and courage. But this is also a story about his courage as he effectively played detective to try and prolong his wife’s life by finding new treatments.

As this episode becomes available, I should be crossing the finish line having cycled from Land’s End to John O’ Groats in aid of OBB.  So, if you feel moved by what you hear, Richard and I would be grateful if you would support our efforts by clicking on the fundraising link below. Huge thanks if you do and in any event thanks for listening.

1. I think that’s really important – understanding the situation you’re in, to the best of your ability and therefore knowing your options and where you might go.  It makes you feel more empowered.

2. The right kind of music will do it for me. Mozart’s Requiem or Beethoven’s String Quartet. Also Harvest Moon by Neil Young – that’s the song that got Jana through the first 9-hour surgery when she was awake while the surgeon was digging into her head.

3. Hiking in the mountains – that would be my third.