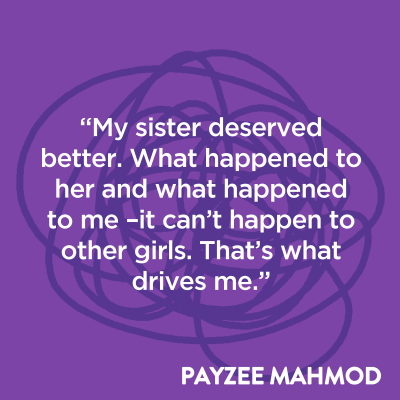 In this episode fashion stylist and activist Payzee Mahmod gives an intense and moving account of a young life etched with horror, pain but now also, years later, with hope. Payzee was just 15 and living in South London when her Kurdish father ordered her to marry a stranger twice her age. Her 17-year-old sister Banaz had already suffered the same fate. Whilst Payzee lived her own nightmare with an abusive husband, Banaz managed to run away from hers. When she later began a relationship with another man, her punishment was to be abducted, raped and murdered.  With a police investigation underway, Payzee was then able to escape her own forced marriage. Banaz’s death, as she puts it, enabled her freedom. But the awful truth about what happened in January 2006 then became apparent. Banaz and Payzee’s father and uncle, along with other male relatives, were later convicted and sentenced to life for her murder – a so called honour killing.  Payzee now devotes her life to a campaign to make all forms of child marriage in the UK illegal. This is Payzee’s story told with heartbreaking detail, clarity of thought and driven by a breathtaking, awe inspiring sense of purpose.

1. Creativity – If I’m not in the best place I want to make something.

2. Social media – For me, it’s where I’ve really found a great deal of support and friendships.  I never knew that speaking out and telling my story would encourage so many young, especially Kurdish girls and women to tell me their stories.

3. Walking with my dog just soothes and calms me.

This episode is, at times, a difficult listen. At several points in our conversation I struggled to find an adequate response to Payzee’s eloquent and painfully honest description of her young life. How does someone survive or cope with all that Payzee and her sister Banaz endured?

What perhaps struck me most deeply was the inexplicable absence of support for Payzee and, of course, her sister. How could an ordeal lived in plain sight in modern day London be ignored so often and so comprehensively? By schools, shopkeepers, the registrar who married her and, of course, the police. As Payzee said: “It blows my mind that not one person in my life asked if I was ok.”  What is also astonishing is that Payzee has only recently been able to find and receive the professional help she needs. She now, thankfully, has a Kurdish counsellor who understands the multi layered complexity of her experience. Payzee is determined, on Banaz’s behalf, to campaign for an end to all forms of child marriage. Through her passionate activism she has turned the oppression that killed her sister, into an inspiring, powerful tool for good.  As Payzee puts it: “My sister deserved better. What happened to her and what happened to me – it can’t happen to other girls. That’s what drives me.”