Nimco Ali on the brutality of FGM, intimidation and Girl Power 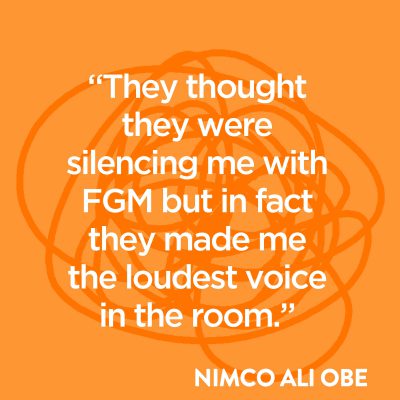 Our guest this week is Nimco Ali OBE.  A leading survivor activist, author and political strategist.  Born and raised in Manchester, at the age of six whilst on a trip to Somalia with her Grandparents, she found herself caught in the crossfire of a civil war.  Forced to flee and unable to return home, she was for a time a child refugee.  She found safety with her family but the following year, faced an altogether different trauma. Organised and encouraged by her own mother, Nimco underwent the brutality of FGM.   She later became seriously ill as a result of complications from that abuse. The mental scars continued for many years to come.  Despite this Nimco has become one of the world’s most powerful campaigners and activists against FGM – an act that still impacts many millions of women.

In this conversation, Nimco speaks impressively about how she managed the impact of her crises including the complex and fractured relationship with her mother and family. To this day she is subjected to intimidation and criticism for breaking the code of silence that too often exists around FGM.

In this podcast she talks powerfully about the methods she has deployed to survive and thrive including a sense of humour and a love of The Spice Girls.  Nimco is an extraordinary woman who, through her sheer force of personality and strength of mind, has brought about change in attitudes towards FGM here and abroad.

3 – The Spice Girls – I believe they were fundamental to my activism – a group of women who took on the patriarchy in a different way.  I was once asked what my favourite quote was and I said  –  “If you want to be my lover, you got to get on with my friends”

Nimco Ali is a British woman who has faced down the most difficult, personal crisis with determination and the most astonishing single-mindedness, which she has put to work for a positive end.  She is simply extraordinary and it’s hard to do justice in these notes to her story.

That the FGM she suffered was organised and encouraged by her own mother, as is so often the case, just provided another layer of terror and confusion for this incredibly bright young girl.  And that her mother adored her – her name means Gift From God – is another element of her story that is hard to reconcile. These facts alone you would think would prevent Nimco from thriving as she grew older.

But these childhood crises that Nimco faced, turned out to be the fuel for a remarkable adult life as a campaigner and activist.  Putting aside threats and intimidation from her community and relatives, Nimco has become a voice for the many millions of girls who have undergone and continue to undergo FGM.  As she puts it, “They thought they were silencing me with FGM but in fact they were making me the loudest voice in the room.”

With her own story she has proved beyond doubt that from horror, can come hope.  That she counts her sense of humour as one of her most effective crisis tools, also hints at the unique and powerful way she has approached her life.

Nimco’s no-nonsense, no pity approach to her life is inspirational. It was a real privilege to have recorded this episode in her company.