Nicky Campbell on adoption, guilt and a dog called Maxwell 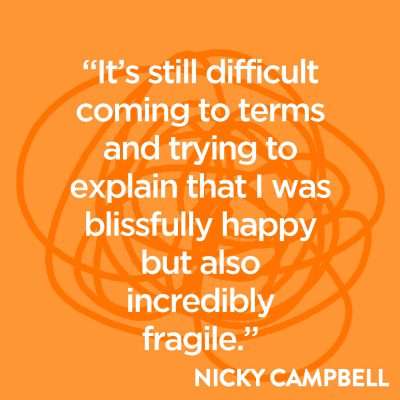 Nicky Campbell is one of Britain’s best-known radio and TV presenters – a voice and face of calm, decency and reason. A personality whose talent, craft and ambition led him to Radio One, Wheel of Fortune, Top of the Pops and Watchdog. For the last 18years he has presented the Radio Five Live Breakfast Show and since 2011 Long Lost Family – where he helps reunite adopted children with their birth parents. Yet for so many years, away from the microphones and cameras, Nicky was secretly battling mental health issues that flowed from his own adoption as a baby in Edinburgh. After meeting his birth mother, Nicky’s struggles for identity deepened, ending with a breakdown in 2013. After that dramatic collapse outside Euston Station, he was diagnosed as type 2 bi-polar … a condition that he discovered his birth mother had also suffered. Nicky came through thanks to the support and love of his wife Tina, their daughters and his beloved dog Maxwell. He has detailed his emotional journey in his brilliant new book One of the Family. A raw, intense but valuable conversation for anyone struggling to understand themselves and their identity.

Nicky’s Crisis Cures:
1. The Beatles – I fell in love with them when I was 12. I remember hearing my sisters ‘With the Beatles’ cassette – they just spoke to me. It has a hymnal quality which I find incredibly moving – I want ‘Hey Jude’ played at my funeral.
2. The Highlands – We took our holidays there. The smell of the heather, the smell of the ferns. The burns, the fields and the farms and the midges and the rain – I adored it. It’s where I feel the happiest
3. Book – On The Origin Of Species – Charles Darwin. I’ve got into the whole idea of common ancestry – I love that phrase of Richard Dawkins “The Magic of Reality” – the idea that science is more spiritually spine-tingly amazing than anything in the scriptures. I’ve really got into that.

Show notes:
Nicky’s life as I’ve said throughout this interview was, until 2013, something of a slow-moving crisis. He says himself that his adoption provided a drive, an ambition that led him to being so successful. But it also laid the tracks for a darker, more difficult journey – a journey to discover his identity – and which ultimately led to the bipolar diagnosis he shares with his birth mother.
He spoke thoughtfully about coming to terms with the paradox of adoption as he calls it … that he wanted to belong with his birth mother, but he didn’t want that to mean he’d no longer belong with his Mum and Dad Frank and Sheila.
Nicky’s analysis of that paradox – and how he managed to resolve it – I thought carried wider lessons for anyone in crisis. As he puts it ‘It’s okay not to know how you feel and it’s okay to feel nothing – to just go with the flow’. Though simple, it’s an approach we can all deploy from time to time.
The dogs in Nicky’s life have clearly played an important part too, offering him incredible support over the years. From Toby, the dog he spent the first nine days of his life with, then Candy – his childhood companion, through to Maxwell his current dog who inspired a book and as Nicky says – changed his life.