Lorraine Pascale on rejection, the pity pool and making the mess your message 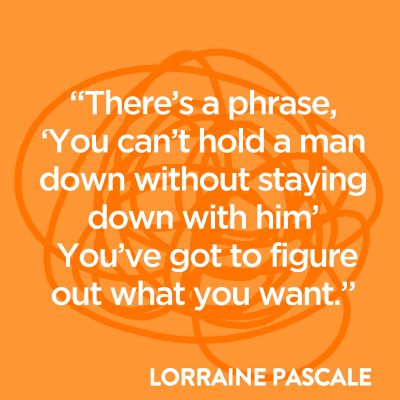 Scouted at the age of just 16 – Lorraine Pascale was the first black model to appear on the cover of US Elle magazine. She featured in the 1998 Sports Illustrated swimsuit issue and was photographed by the late Corinne Day for The Face magazine with supermodel, Kate Moss.  When the modelling career came to an end, she went on to new heights as a chef, an author and TV presenter, achieving success on both sides of the Atlantic.

But her early life was a far cry from her later triumphs.  Fostered shortly after her birth, then raised by a woman in the grip of alcohol addiction, she was once more put into the care system, only to endure long years of pain and hardship.  Lorraine speaks candidly about this time and how meeting her birth mother much later on, left her convinced that she was a complication she didn’t want, or need in her life.

Despite all of the childhood trauma, Lorraine is positive and demonstrates throughout why her no nonsense practical approach to problem solving has earned her the nickname of ‘Mrs Solution Focused’ amongst her friends.

1 – Exercise – that’s getting up and going to the gym.  Getting on the treadmill and each day trying to beat the previous run.  It gives you a great sense of achievement and gets the dopamine going.

2 – Vivaldi’s Four Seasons – Spring – I have it on repeat.  I find it very powerful. Music is a great cure…

3 – Constant self-talk – Affirmations. I was dumped on the day my mum died – that’s a crisis.  It was the only way I got through it.  Things like, “You’re going to be okay, you’re great, you’ve got this…” – It sounds weird, but it really, really works.

Lorraine Pascale is an incredible woman – a bona fide force of nature.  As an author, TV personality and former model it’s her ability to reinvent herself which means that she’s always looking forward, never back.

But as well as the successes, Lorraine has also known real despair.  An early life spent in the damaging cycle of the care system as we discover has left its scars. Crisis has played a big part in her life – as she says, “The things in childhood I couldn’t control and in adulthood most of which I probably caused.  Crisis felt like a great sense of familiarity and safety – because it was what I was used to”.   Lorraine is another example of survivors who put their stories to work, taking ownership in a bid (as she puts it brilliantly), to “Make my mess the message”.

A firm believer in therapy she has a practical no nonsense view on what has worked and what hasn’t worked for her.  Now studying for her PhD in psychology, Lorraine shares her moving and valuable story with me and what work she had to do to ensure she could as she says, “Get out of the pity pool, grab life by the horns and go for it”.