Bill Browder on murder, guilt and living with fear 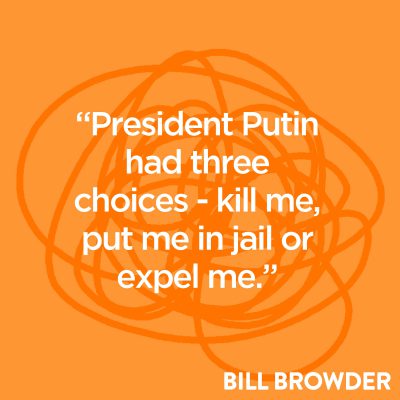 Bill Browder describes himself, with justification, as Vladimir Putin’s number one enemy. His best-selling book Red Notice – an autobiography that reads like a thriller – tells the story of how the grandson of one of America’s best-known communists became one of Russia’s most successful capitalists.

Bill is founder of The Hermitage Fund which at its peak became not only the largest foreign portfolio investor in Russia but the best performing fund in the world. But when Bill fell foul of Putin’s personal agenda, he was suddenly and dramatically kicked out of Russia. Bill reacted by setting out to expose a shocking case of state-sponsored corruption. His lawyer, Sergei Magnitsky was later arrested, tortured and in Nov 2009, whilst in custody, brutally murdered.

Bill has since devoted his life to creating a legacy for Sergei and his family.  Something he achieved against the odds with the implementation of The Magnitsky Act – a law to punish Russian human rights violators – since adopted in a number of other countries.

To say that this one-man crusade has irritated the Russian President would be an understatement. Putin has repeatedly abused Interpol’s Red Notice system in a number of failed attempts to have Bill arrested and brought to Russia.

Bill continues to live in fear that the shifting sands of global politics will somehow allow Putin to one day get his revenge. Bill is certainly no friend of President Trump and fears that were he to return to the White House that this could lead to him being a pawn in a Russian/US deal.

Though a staggering story of crisis for Bill, he maintains that it is a much more important one for Sergei and the family that he left behind.  The way in which Bill describes his burden of guilt over the death of his friend, who demonstrated astonishing bravery in the weeks before his death, is deeply moving.

But it is the way in which he has come to terms with a life of constant crisis and threat, at least for as long as Putin is in power, which is for me the most fascinating and chilling aspect of this conversation.

1. I have a Peloton in my basement and the worse things get, the harder I work out – so I’m in the best shape when times are really bad.

2. I focus on my family. It’s kind of weird to be fighting murderers on the one hand and then being at the school gates.  The normalcy of bringing up a family is incredibly helpful in these situations.

3. I listen to country music. There’s a song called ‘Beer For My Horses”. It’s about a bunch of Texas lawmen who after they’ve rounded up a bunch of bad guys and hanged them, serve beer for their horses and Whiskey for their men. I love it.