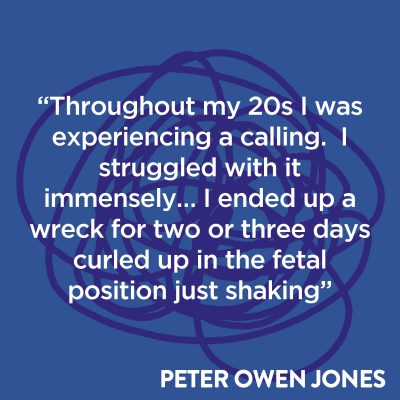 Peter Owen Jones is the former ad man who gave it all up to become a parish priest. By the late 1980s, the former farm boy had carved out a successful career working as a creative director for a top London agency.  But shortly before his 30th birthday, Peter walked away from his lucrative career to embrace a simpler, more meaningful life.

Known to many as the ‘vicar in the hat’, and seen often on TV, Peter is an unconventional priest – whose views and approach are often at odds with classic Church of England doctrine.

Given up for adoption at six weeks old, he says this void left him feeling as though he had a space inside himself, full of unanswered questions. So, when he himself became a father, he set out to find his birth mother. Six months later they met for the first time on a train platform in Scotland.

During our conversation Peter discusses the power of embracing vulnerability and putting it to work. As we all reach the end of another difficult year, there are some useful lessons here which can be put to good use, regardless of your faith.  A perfect Crisis Shortcut for Christmas.

1 – Lie down.  When you are feeling overwhelmed, when you’re feeling deeply distraught and the full force of crisis hits – lie down.

2 – Pray.  To open yourself to feel the full force of the pain you are experiencing and invite healing into that place.

3 – Walk.  St Francis of Assisi said “Solvitur ambulando – it can be solved by walking.”

Crisis Shortcuts is brought to you by Myndstream, music designed to help you, your loved ones and even your pets feel calmer. Check out Myndstream, that’s mind with a Y on all the usual streaming platforms. Welcome to Crisis Shortcuts with me, Andy Coulson. Occasional bonus episodes to sit neatly alongside the main podcast, Crisis What Crisis? And much like those longer conversations, in Shortcuts you’ll hear from brilliant people who in their own words tell us about their crises, how they got through them and what they’ve learned. Although these episodes are brief the insights are just as big. So if you’re short on time but looking for inspiration or guidance Crisis Shortcuts will offer a quick fix for useful lessons provided by those who’ve been there and lived to tell the tale.

And don’t forget you can still join me for our longer conversations on Crisis What Crisis? where we talk in greater depth and share those powerful coping strategies that will hopefully guide you through the pitfalls of life. You can follow us on Instagram and Facebook our handle is @crisiswhatcrisispodcast and if you like what you hear please do head over to Apple and leave us a rating and review it really does help make sure that these stories get to the widest possible audiences. I hope you enjoy this Crisis Shortcut.

My name is Peter Own Jones. About a thousand years ago I stopped working in the advertising industry in London and became a parish priest. I grew up in a wonderful house which backed onto some fields about thirty miles south of London. I was adopted and so there was always that space inside me which was full of unanswered questions. When I had my own children I decided I would look for my birth mother. I had a knock on the door actually one day and this woman came to the door and I’d never seen her before and she said ‘I hear you’re adopted’ and I went ‘Yes I am.’ And she said, ’Forty years ago I gave up a girl for adoption and there is not one day that I do not hope for a knock on the door.’ She really gave me the understanding of how important it was to try and join up these pieces of string.

And so I did and six months later I ended up on a train platform in Scotland and there she was. I wasn’t looking to fill that void with something other. I kind of vaguely understood that I needed… that at the centre of that void was myself and that essentially was what I was looking for. When we say I am looking for meaning, it isn’t meaning we’re looking for it’s the meaning for I.

The education system and I needed to part company and I was very fortunate that the headmaster of the school I went to actually agreed with me on that front. It was probably the only thing we ever agreed on. And so he very sweetly invited me to leave and I took him up on it. But again, I mean, really in many ways that was the making of me. It kind of, got me off the treadmill, took me out of this conventional run of, this kind of factory farming, forming of A levels University career, suddenly all of that was gone and that was a tremendous liberation.

After being invited to vacate the school premises I went to Australia, I became a Jackaroo and then I came back and I farmed for… I was a farm boy and I loved it. I loved being outside and the physical work.

And then one of my dear friends was at Manchester art college and he said ‘Look Pete, you know, I’m doing a course in advertising I’m rather worried about saying this but I think you might be quite good at it.’ So I took a train up to London and I was walking down Kensington High Street and I went into a job centre and it said messenger boy wanted in advertising agency. And it was Friday afternoon. And the bloke behind the desk very kindly gave me the bus money and so I took a bus into the west end and I got the job and started on Monday. And ten years later I was a creative director.

It taught me how to think, you know, having left school at sixteen there was a huge chunk that was kind of missing. But actually working on strategy and concepts and creatively trying to find a way to unpick particular problems, I found incredibly satisfying.

Throughout all of the chaos of the teenage years and my twenties, on farms and lately working in the west end in London, I was experiencing a calling. I’m just going to call it a calling because that’s the traditional way that it is described. And in that I continually experienced and felt that I should be a parish priest. I mean it was completely ludicrous and I struggled with it immensely. I didn’t discuss it with anyone. I would creep into the back of church and so on Sunday and burst into tears not really knowing what was going on.

After about seventeen or eighteen interviews I was accepted to train as a parish priest. It’s an extraordinary, the first day was extraordinary. I just looked around me and I thought I’m on another planet here. And I knew there was always going to be a tension between the religious path and between the path that I had always travelled which was one of exploring and creativity and imagination. And in a sense that tension still exists today. I did try once I was ordained, I did try, I tried for about six months and I got a short haircut, I wore a dog collar and a sensible jacket, but I was acting. And that’s probably the worst thing you can do.

This is about the route of authenticity and this is about being who we are. That’s not easy because that means one has to acknowledge one’s shadow and even harder one’s beauty. But I would far rather take that path than spend the rest of my life acting. The notion of the Numenius, the notion of the presence of god, the notion of the divine has got stronger and stronger as I have got older. I think that’s because I have learned to give up all that I was holding onto for dear life and just surrender to really the reality of love.

All parish priests take on suffering; that’s part of what we do and that’s absolutely right. We are there at times when people are suffering deeply, when they’re in when they’re deep in the chasm of crisis. But I think the job of a parish priest is to stand alongside those who are suffering. It isn’t to take their suffering on but it is to walk the walk that they are walking at this particular point.

The desert is an extraordinary place. You know, we live on a part of this planet where there are trees and green and in springtime flowers and swallows arrive and there’s huge birds, symphonies of song in May and June. And the desert, the desert is quiet. Almost silent apart from in storms. And there is nowhere to run there. So you are confronted with all your rewards, all your excuses, what you have hidden, what you haven’t dealt with, all those things that you would actually rather not ever have to face again and deal with. If you go to, if you go on retreat in the desert then those will bubble up from within you and I ended up for two or three days I was just a wreck curled up in the foetal position just shaking.

My second crisis cure is to pray. And by that I mean to open yourself up to feel the full force of the pain that you are experiencing. And to invite healing into that place.

My third crisis cure is to walk. Saint Francis of Assisi said solvitur ambulando, It can be solved by walking.