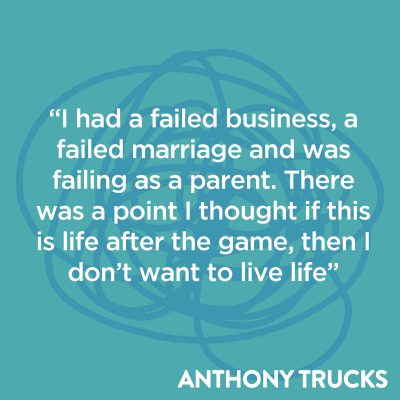 For our second Shortcuts episode, we are joined this week by former NFL athlete, Anthony Trucks.  Anthony had an incredibly difficult start in life, given up by his mother at the age of three, he was placed into the US foster care system, where he was physically and mentally abused, tortured and starved.  At the age of six he was finally placed into a loving family home and at 14 was adopted.

Despite the stability, Anthony went dramatically off the rails as a teenager before football rescued him. He went on to play for three NFL teams but, after a career ending injury in 2008 and the death of his Mum he found himself battling severe depression.

In this episode Anthony talks fluently and powerfully about how he took control of his life again – by coming to terms with his past, his failures and by focussing on compassion. He’s now a highly successful motivational speaker and creator of The Shift Method of personal development.

1 – Reframing failure.  We make it way worse than it actually is.  If you can reframe the failure and find the lesson, you find a way to do better next time.  It gives you hope to not have to face the same crisis again in the future.

2 – Organisation.  The reason a lot of us stay in crisis is we don’t know how to get out of it.  We don’t want to take the wrong path, so we take no path.  I bring everything down to earth and once I can see it, I can chart a path.

3 – Action.  Action ends suffering.  We sit with emotional feelings with no action to change them.  Feelings are born of actions and if you’ve taken an action that’s made you feel this way, the only cure is to take an action in opposition.  That moment you don’t want to move, is the moment you must move and do something.

After a truly appalling start in life, Anthony had the instinct to see the most likely outcome for himself and made the decision to not become as he says – ‘just another statistic’.

A run in with the police shortly after high school confirmed to him that this was not how he wanted his life to be and American football became his saviour.

But then that career came to a premature end (he says NFL too often stands for Not For Long) it’s clear that his life unravelled – his identity immediately removed.  As Anthony says, the impact that NFL carries in the US is so overwhelming, that it left him feeling like no-one without it.

Despite the pitfalls Anthony has encountered in both his professional and personal life, he has an ability to see where he wants to be and then set to work with a clear ‘game plan’. His is a methodical, practical approach to self improvement.

The thing that stuck out for me most in this episode, is Anthony’s approach to fatherhood. Abandoned by his parents – Anthony’s life was set instantly on the wrong path. When he had his first child as a teenager you might expect the same pattern to emerge. But, despite the other dramas in his life, Anthony has remained determined to give his children what he didn’t have. He broke the chain.

Anthony is a powerfully evolved guy and his ability to see the ups and downs of his life as crisis lessons to learn from is inspiring. My thanks to him for joining us on Crisis Shortcuts.