Nick Bailey on being poisoned, losing everything and finding peace 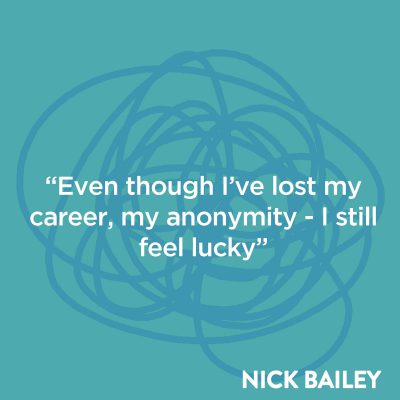 Former Detective Nick Bailey’s life changed forever with the simple opening of a door.  In March 2018, whilst searching the property of Sergei and Yulia Skripal, who’d earlier that day been found collapsed on a Salisbury park bench, Nick came into contact with the deadly nerve agent Novichok. The Salisbury Poisonings, as they came to be known, set off a chain of events which not only put Nick’s life in grave danger but also saw him and his family become collateral damage in an international incident.

In this episode Nick talks us through those days of incredible drama and how, as he recovered physically, he faced the new challenge of losing his home, possessions and later the job he loved.  This is a very human story of a life impacted by truly extraordinary events.  Nick is open, candid and thoughtful about the poisonings and his battle to recover.

1 – Music – When I was in hospital, I couldn’t deal with anything.  I was completely shut off. A friend of mine recommended that I listened to I Giorni’ by Ludovico Einaudi – It freed my mind.  It made me smile, it made me cry.  It was the most beautiful moment I had there.  It means a huge amount to me.

2 – Acts of Kindness. The support from the public was overwhelming.  The generosity and gifts from people who didn’t want anything in return.  We kept everything and still go through it now.  We had an old lady offer us her TV after she heard we lost everything. For every negative, there were a thousand positives.

3 – Running – it was a big thing for me.  It didn’t fix anything, but I didn’t expect it to. Like I Giorni, it just freed up my mind. Then with the marathon I had the focus of raising money for Stars Appeal Charity at Salisbury District hospital (link below).

When I spoke to Nick about how he felt in those early days in hospital when doctors thought he might not survive, he chose the words of Alexei Navalny, the Russian anti-corruption activist, also poisoned earlier that year who said, “It doesn’t hurt – it just feels like your life is slowly being taken away from you.”

Although Nick thankfully survived the poisoning the slow removal of important parts of his life had only just begun.  His home, possessions, even the kid’s toys were all taken away for fear that they might have become contaminated. Later, of course, the poisoning would effectively claim the job the loved.

Nick is incredibly open about the struggles he’s been through, but also quick to point out how lucky he was – so you won’t hear much self-pity in this interview. Although his story is unique, there are useful lessons to be found throughout this conversation – not least how to cope when your life is suddenly redefined by events out of your control. Accepting what you do and don’t have control of when in crisis, is so very important.  Nick’s ability to focus on what was in front of him and refuse to become overwhelmed by the bigger picture – a picture being played out on the news across the world – allowed him to normalise what was happening to him and his family. And this was a crucial factor in his survival and thankfully, eventual recovery.

That Nick is now putting his story to work in the hope that it will help others facing crisis is testament to his resilience and positivity. As Nick says: “If I can let my crisis define me in a positive way, with all the things I’ve learnt about myself – then I have to.  Otherwise, there’s just resentment, bitterness, and sorrow.