Nick Allott OBE on bringing theatre back to life, grief and the art of recovery. 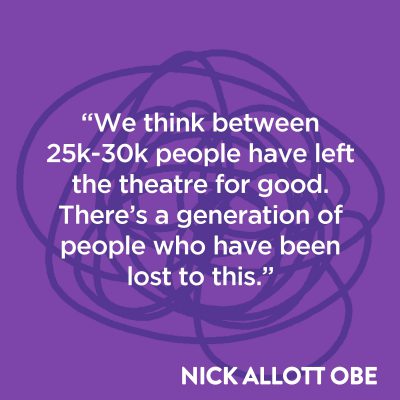 Nick Allott OBE is one of Britain’s most successful theatre executives.  For over 40 years he’s been at the forefront of some of the biggest West End and Broadway shows, including Oliver! Cats, Miss Saigon and Les Misérables. He was executive producer of the Oscar winning Les Mis film and was one of the team  who brought Hamilton to London.

Now as Vice Chairman of Cameron Macintosh, Nick has also led the fight to save theatre – an industry stricken by the pandemic. In this episode he talks in detail about his approach to crisis management. But he’s also candid about a life peppered with personal crises, from the loss of his father in a helicopter accident at 15, the subsequent devastating impact on his family, his own near-death experiences and how he has approached the impact of grief.

1 – Having a morning routine and sticking to it. My dog wakes me up 7am – she makes a little whimper and I ruffle her ears then we both go outside.  Cup of tea, then it’s back to bed with the iPad to read all the papers. Then it’s back up for some vigorous exercise on the Peleton bike.  Finally, to finish – a really cold shower and no matter how bad you feel when you wake up, you’re set up for the day.

2 – Cooking. I had to learn to cook as neither of the key partners in my life cooked – my kids all do, so I love it when we all collaborate to make something together.  Half are vegetarian and half eat meat so it’s a big meal.  Number one dish is an Asian curry.

3 – Music.  It’s underpinned my whole life. For me the best experience is live music.  I really miss crowds – I love it!  I’ve seen all the great rock bands.  If I’m depressed or worried, I listen to a live recording.  If I had to commit myself to one, it would be – Pink Floyd – Comfortably Numb.  The first band I fell in love with.  Nick Mason is a very close friend and for air guitar players it has the best guitar solo ever done.  It never fails to thrill me.  I cannot wait to get back into a room or field full of people.

4 – The one piece of theatre I could watch over and over and over again, and it would endlessly sustain me, would be the end of the first act of “Les Misérables” a song called ‘One Day More’ … as much for the audience’s reaction.

It’s clear from the start of my conversation with Nick Allott, that he cares deeply about the industry he has devoted over 40 years of his life to.  He speaks passionately about the fight for survival as we reach yet another critical moment in this pandemic, with the delay on restrictions being lifted.

Nick takes us through the impact of that decision layer by layer from disappointed audiences, politicians struggling to understand the impact on the business, to the people forced to leave the industry – many never to return. He puts a human face on the devastation being faced by the performers, musicians, technicians – the huge community of ordinary people whose lives have been wrecked by Covid.  Nick paints a picture of the hand to mouth reality of theatre, detailing how one couple went from leading roles in the West End to sharing a Hermes driving job.

Nick’s own life has also been occasionally interrupted by crisis, losing his father at the age of just 15 in a helicopter accident, which triggered anorexia in both his sisters.  He later was to lose one of those sisters, Serena followed by a number of close friends and then finally his beloved mother at the start of the pandemic as he was battling a bout of Covid himself.

There’s so much in this chat for anyone looking for lessons for when life goes wrong.  Nick quotes an article written by his late sister Serena who said: “There’s a reason in aeroplane that you’re told to fit your own oxygen mask before helping others.”  As Nick says, in his life, he’s too often failed to do that and paid the price as a result.  A strong believer in therapy he is now retracing some of the steps of his life – including his father’s death – to gain a better and deeper understanding of the crises he has faced.

A fascinating chat with a brilliant man.