Mark Hix on going bust, losing his name and battling back 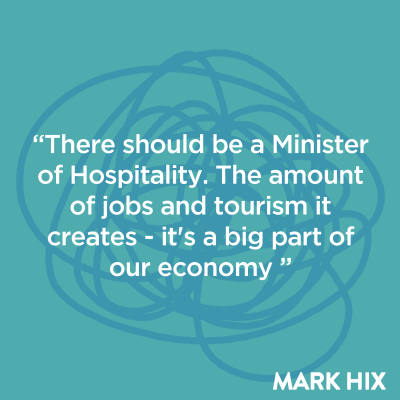 Mark Hix is one of the greats of British food. His HIX empire spread across London and beyond with a string of critically acclaimed restaurants. But when the COVID lockdown struck, the HIX group quickly crumbled. Mark – having previously handed control to investors – lost everything including the right to use his own name.  In his words, he was: “Done, gone, finished for good.” Back in his native Dorset, and a bottle of wine in, he decided to get back in the game … by buying a mobile food truck, converted from an American ambulance, on eBay.  This is the astonishing story of a famous chef’s refusal to surrender to the collateral damage of COVID and the vagaries of the hospitality trade. A must-listen for anyone facing or fearing business collapse in these challenging times.

Rarely on the podcast do we talk to someone still in the midst of their crisis, so it was a privilege to chat with Mark this week. He is a brilliant chef whose move from the kitchen to restaurant owner 12 years ago was seamless and successful. But as he explained with such brutal honesty, the financial reality of his business was not always as it appeared to customers and the media. “People would say, ‘Hix SoHo looked really busy last night, Mark’ when actually, we were losing £200k a year because the landlord put up the rent.”

That financial reality pushed Mark into a partnership that in turn led him to cede control of his business. And when COVID struck that meant the decision to close was not his, and that he lost the right to use his own name as well as the ability to protect his 130 staff.

The shock of those developments would send most people into the darkness. But instead Mark went back to basics, remembered that his talent had not evaporated with his business and found a small but smart way to keep in the game.  Even if it meant making mayonnaise in his own kitchen before a day’s work that would pay only £140.

I think the HIX food truck is a great totem for Mark’s astonishing resilience – mobile, flexible and sturdy. Mark had lost it all but having reset himself and his expectations he is able to focus on the rebuild. More modest, for sure, but also more experienced and independent.  And the food is just as good.