Hemant Oberoi on the Mumbai attacks, loss and humanity 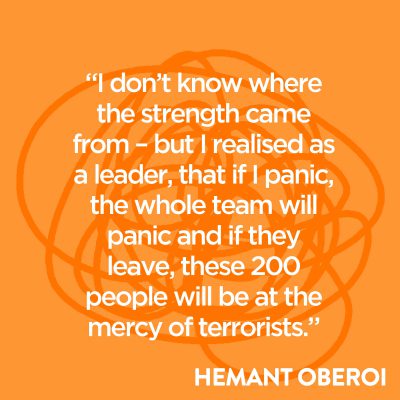 In this first episode of our third series, we talk to Hemant Oberoi.  One of India’s best-known chefs, Hemant has cooked for world leaders, Bollywood and Hollywood stars. He is also a man who, when crisis came to his door at the Taj Hotel in Mumbai, reacted with a level of courage and selflessness that’s almost impossible to comprehend. In our conversation Hemant talks us through what happened in the terror attacks of 2008 – a few days of horror that left hundreds dead and injured. Thanks to the heroics of Hemant and the staff a significant number of guests at the Taj were saved from certain death at the hands of Islamic terrorists. In the process seven of Hemant’s staff were killed. It is only fate that prevented Hemant from being one of them. A visceral story of how crisis can bring out the very best in humanity when confronted with the very worst.

1. Intuition and the gut feelings first. My intuition never fails me. When I don’t follow it, things go wrong for me one way or the other. It’s the gut feeling – I listen to my inner voice and that’s the way.

2. I think one should be a team leader in a different way. You should be like a pyramid in life. Sometimes the top is down and sometimes the bottom is up. That way you can take the load off others in life.

3. Help others as much as you can. Because you never know when you’ll need it.

It’s not often that a Hollywood dramatization plays down the real horror of a story. But Hotel Mumbai – the powerful re-telling of the Mumbai attacks – is not a movie that tells the full truth of what happened in November 2008. During my conversation with Hemant he revealed aspects of that nightmarish few days that left me stunned. The film ends movingly with a fictitious character (played brilliantly by Dev Patel) returning exhausted to his relieved family. In reality Hemant did just the same, once he’d secured the safety of his guests. Still wearing his bloodied chef’s outfit, he walked through his front door to find his family, friends and neighbours gathered – not in celebration but for his wake. Unknown to him hours earlier the TV news channels had announced his death. As Hemant says: “I walked in and they thought they had seen a ghost.” A few hours later he was back in the centre of Mumbai, walking through hospitals and morgues trying to account for every member of his staff.  Tragically seven of them – including a number of young chefs he considered to be his proteges – were dead. All of them shot attempting to protect hotel guests from the gunmen who unleashed so much havoc and horror across Mumbai. Hemant witnessed some of those murders and narrowly escaped his own execution. Of one of those he found in hospital he says: “He pleaded [with the gunmen] that he was getting married in six months’ time, asking, ‘why are you killing innocent people?’ They shot him point blank.  He died in hospital after 8 or 9 days.” The most astonishing aspect of this story is the instinctive behaviour of Hemant and his staff when they found themselves in the midst of the most terrifying crisis. Throughout their ordeal they had repeated opportunities to escape. Hemant gave his team that option, telling them there would be no shame in leaving to be with their families. But they stayed put. As Hemant tells me: “Whatever you do – if you cannot help others, then there’s no point being here. Everything comes back to you in this life.  Hell, or heaven is here – it’s not anywhere else.”