Dr Richard Shepherd on a career immersed in crisis, his unravelling and why Brits are so bad at death 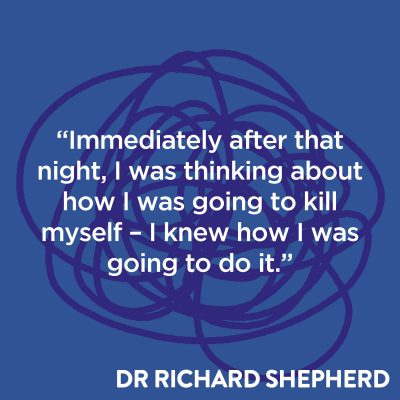 Dr Richard Shepherd (Dick) is an Expert Forensic Pathologist who has conducted over 20,000 post-mortems throughout his illustrious career.  Many of these have been in the aftermath of some of the world’s most shocking disasters of recent times – including 9/11, the Clapham rail disaster, 7/7 and the death of Princess Diana.

But in 2016 Dick suddenly struggled to separate his work and homelife, something he’d always prided himself on being able to do. It started with a panic attack whilst flying a light aircraft over the town of his first high profile assignment, Hungerford.  And it culminated with the simple chink of ice in his wife’s gin and tonic – the moment which, as he says, snapped his links with reality and sent him back to the mortuary at the Bali bombings.

Dick is brutally honest during our conversation, about his inability at that moment to carry on, and the dramatic unravelling that followed which led him to consider suicide. Thankfully, with the support of his wife, herself a doctor, and the help of counsellors, Dick made a full recovery and was able to return to his work. Now aged 69, his passion for pathology is as strong as ever.

Dick has written two insightful and brilliant books which I urge you to read before the summer ends. They provide a detailed account of what it is to be pathologist and the critical role it plays for us all.  Including the ‘inconvenient truths found during a post-mortem’, as Dick puts it, that have ensured justice has been done and answers provided to those who have lost loved ones.

1. FLYING – It just has nothing to do with my day-to-day life. To climb into my little plane and take off into a blue sky over the coast to France for lunch.  Intellectually it is interesting to learn but it’s the freedom and it is a very good clearer of minds.

2. MUSIC – I love music of all types. I’m very broad-church.  If I’m very stressed it’s Marriage of Figaro and Cosi Fan Tutti – Mozart. When I’m a bit grumpier, it’s the other end of the spectrum – and there’s always, Pink Floyd – Another Brick in the Wall.

3. Reading – I’m not very good because I usually fall asleep. Holidays are when I read most.  100 years of solitude by Gabriel García Márquez.  It’s a tremendous story – I can keep going back to it.

The Seven Ages of Death by Dr Richard Shepherd is published on September 2nd, available from Waterstones athttps://www.waterstones.com/book/the-seven-ages-of-death/dr-richard-shepherd/9780241472033.

The Unnatural Causes tour is starting on October 5th – find events at: https://drrichardshepherd.com/events

Dick Shepherd is a man who has lived his professional life – over four decades, at the sharp end of some of Britain’s most dramatic and disturbing crises.  His work has helped solve some of the worst individual crimes of modern times, including Harold Shipman and Robert Napper.

Whilst this interview is not for the faint hearted, I can tell you that it’s utterly compelling, largely because of the clarity and frankly at times, humour that Richard brings in telling his incredible story.  Richard’s work and the breakdown it caused has given him a perspective that very few others have – on death of course but also what it is to survive crisis – both professionally and personally.

This is a conversation about crisis at its most visceral and therefore, meaningful.  It’s one about death – but one ultimately, I found to be really life enhancing and I hope you do too.